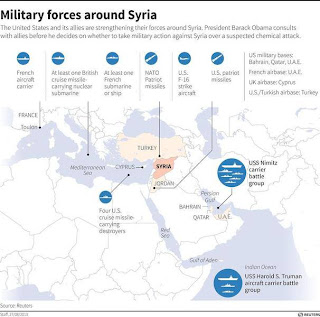 Yesterday, US State Secretary John Kerry dramatically rose the tone towards Syria. His declaration to the press was but an inch short of a declaration of war towards the Assad regime, in the light of last week’s alleged chemical attack on civilians outside Damascus.

As US Navy ships and British air forces take position in the Mediterranean, it is rather clear that as soon as chemical attacks are indeed confirmed, the responsibility for them assigned, the airstrikes from a limited, US-led coalition will strike at Syrian governmental and military targets, first with cruise missiles to take out the anti-air and Syrian Air Force targets (roughly 500 combat aircraft), then likely mop up the remaining targets with coalition aircraft.

The conflict, which started in March 2011, has caused at least 100,000 deaths and through it all, Syria has become an abysmally failed state. Once responsibility for the chemical attacks is proven, it will strengthen an already strong case for an international military intervention under the norm of the responsibility to protect which three pillars state that:

A state has a responsibility to protect its population from genocide, war crimes, crimes against humanity, and ethnic cleansing.

3. If the state manifestly fails to protect its citizens from the four above mass atrocities and peaceful measures have failed, the international community has the responsibility to intervene through coercive measures such as economic sanctions. Military intervention is considered the last resort.

If it is proven that it has used chemical weapons against civilians, the Syrian state will have crossed a point of no return in international law. While tens of thousands of innocent civilians have already died throughout the civil war, many of these deaths are perhaps considered “normal” in a state consumed by intense, violent internal strife and utter chaos. However – and perhaps unfortunately – the deliberate use of weapons of mass destruction on civilians constitutes that “red line” which call for a swift international intervention, because the Syrian regime might have confirmed its predatory intentions towards its own populace and that world powers cannot let the use of those weapons be without severe repercussions.

While on paper, the Syrian situation does seem to justify an intervention in accordance to international norms and international law, the devil, as always, is in the details.

First off, we must consider the unintended consequences of our actions. For nearly three years now, the Greater Middle East has been in a state of flux, instability or revolution. Bring down a dictator and you bring up the Islamists, destroy the devil you know and then deal with the devil you don’t know. In the West, we looked at Tunisia, Egypt, Libya, Yemen with great hope, only to find out it was more like 1848 and not 1989. Even if the Assad regime was to be obliterated, the thought of a continuing civil war, renewed sectarian violence and an altogether worse fate for Syria can’t be too far in the minds of the Western decision makers, which stretch far beyond the impact of the usage of chemical weapons.

Secondly, there is the danger of regional escalation, or spillover, because of Syria’s geopolitical situation. With the conflict between Shia and Sunni Islam militias and splinter groups kicking in ever high gear throughout the Middle East, the Israel-Palestine deadlock, the Egyptian counter-revolution, the instability in Turkey, the Kurdish independence movement, the renewed strife in Iraq, the tensions over the Iran nuclear program, the Western pullout from Afghanistan, the potential for one explosive situation to set another one ablaze is very high. The question then, is not so much “should we intervene?” but rather “do we dare to intervene?”

“Battle not with monsters, lest ye become a monster, and if you gaze into the abyss, the abyss gazes also into you.” - Friedrich Nietzsche

Who exactly would benefit from a Western military intervention in Syria?

If it is decided that Western powers must strike at Syria, they must accept that they are directly providing help to Al-Qaeda affiliates fighting Assad’s regime, and that in the medium to long run, military support combined with the weapons which have been delivered to rebels in the past months will benefit the dreaded groupings whose philosophy brought down the World Trade Center and caused the Western powers to occupy Afghanistan for more than a decade. In short, helping topple Assad now might help global terrorism grow in the years to come.

Perhaps this commenter on the Toronto Star’s webpage put it better than I could:

“There is little to choose between the Baathist butchers of the Assad regime and the Islamist fanatics of the "rebels". Syria has became a proxy for the war between the Shiites of Iran and Hezbollah and the Sunnis of the Muslim Brotherhood and the Wahhabis and the world has a choice of horrible or terrible, and the poor Syrians and Lebanese caught in the middle lose whatever happens.”

Russia on the defensive 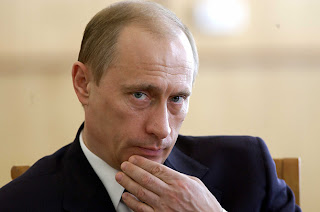 In conclusion, aside from President Assad, the person who stands to lose the most in the Syrian crisis is Vladimir Putin. While the Russian president has always been fairly nationalist, skeptic of Western intentions and longing for the good old Soviet influence days, ever since his return to office for a third term, he has squandered many opportunities for Russia to play an influential and helpful role in shaping international events, the pinnacle being the Syrian crisis. By playing the ying to the US’s yang whatever the conflict, his attempts at asserting Russian independence have come across as pandering to his home audience. A Western strike without the approval of UN Security Council on Syria would likely be the most serious political rebuff to Russia, and could possibly send the nation in a period of reevaluation of its foreign policy.
Posted by Alexandre T. Gingras at 5:15 PM